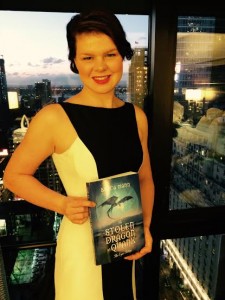 Becca Mann is a 17-year-old fantasy writer who likes chocolate milk, Broadway Musicals, and reciting digits of Pi. Becca has traveled and written in six of the seven continents. She now lives in Baltimore and is a member of the USA Swimming National Team. Becca started writing The Stolen Dragon of Quanx on her smartphone when she was eleven years old. Becca heard that her bio will change dramatically as her career advances, but for now she’s stuck staring at a black line at the bottom of the pool, creating ideas for her next book while simultaneously wondering what life will bring. She’s often accused by parents, teachers, and coaches as “living in Quanx.” 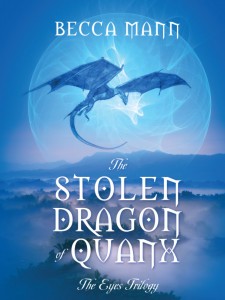 Kale had no idea how Paka knew that there was something about the sword that she didn’t want him to know, but she had reached her decision. Paka obviously wasn’t going to let her leave until he had gotten a look at the sword. She was just thankful that Winikona hadn’t decided to come along. “I’ve decided to name my horse ‘Seeker,’” she randomly told her friend. Then she passed her friend the sword and Paka took it with a smile. Then he inspected the pommel, the hilt, the side, the other side….

The light-blue eye and the dark-blue eye both landed on the engraving. He stared at it for a few moments and slowly his gaze began to rise up until he was looking Kale straight in the eye. Then he recited, “Elise Translunski was a peasant, born on the Islands of the Peasants. She was a descendent of a man known as Brogan, who was driven from Xangterro many years ago when he failed to pay his taxes. So Brogan retreated to the Island of the Peasants where he eventually started plotting revenge.

Brogan wanted to get his home back and wanted Xangterro to pay for what they had done. He rounded up the peasants of the Island he was on, and sent some former Persquunians to swim to the others islands to gather more people. Then he held a meeting on the largest island, where he told the peasants that they would get their revenge for everything that Quanx and their leaders had taken away from them, no matter how long it was to take. All the peasants agreed much too happily. They all started training their youth and preparing their weapons.

They knew that the battle might not take place for many generations, which they were correct in guessing, since this battle hasn’t happened,but that did not hold them back. They wanted their children and their grandchildren to live in royal palaces on Quanx, something they had dreamed of themselves, but had never achieved.