Welcome to my tour stop of The Replacements 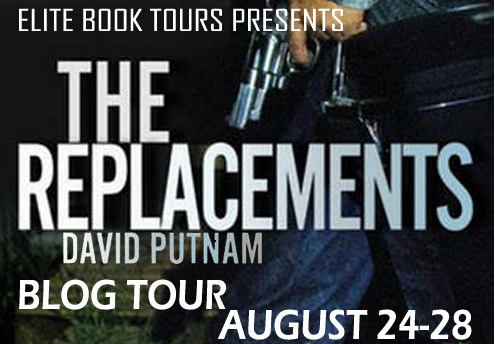 It was always about the kids. Just when Bruno Johnson believed he was safe from his past, he is ferreted out in Costa Rica and enticed to return to a world of emotional turmoil, kidnapping, and criminals. The Replacements by David Putnam puts the reader on the fast track to a dangerous mission where three young innocent lives are at stake. Former LA cop and convict, Johnson, remains true to his principles when he grants a favor to a former colleague of the Montclair Police Department and friend, Barbra Wicks, for the sake of three children who are victims of a vengeful serial kidnapping by a suspected Jonas Mabry. Bruno is the only one the kidnapper will deal with in negotiating a deal.
~
When Bruno saves the life of a young Jonas Mabry from a gunshot wound to the chest by his own mother, Bella, he never imagined the boy would haunt him years later and set him up as a strange payback. An ironic twist of fate pits Mabry against Johnson and the clock is ticking. Enlisting the aid of his wife, former colleagues in the police department, and even a wanted criminal (Karl Drago), Bruno rolls the dice on whom he can trust to outwit Mabry in a cat and mouse game. Sneaking into the Sons of Satan’s clubhouse and stealing a hidden fortune becomes the only possible way to generate a quick turnaround on a ransom request, but one that will endanger everyone.
~
Putnam creates the ultimate protagonist in Bruno who possesses the skillful cunning of a detective but with the insider perspective and aggression of a mastermind criminal from his time served for killing his abusive son-in-law who also murdered his grandson. The tension never leaves the pages of this thriller where the lines of justice and courage are constantly pushed beyond the limits. Readers will chase Bruno to the end of a treacherous and dark journey. 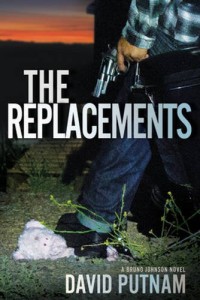 Bruno Johnson, ex-detective with Los Angeles County Sheriff’s Department and an ex-convict, is hiding out from the FBI in Costa Rica, tending bar to support eight children he illegally rescued from abusive homes. Partway through a normal day, Barbara Wicks, a former colleague and the chief of police for Montclair, California, walks into his bar. Bruno is shocked to the core.  Is she there to arrest him and take him back to California? Turns out she’s there to request Bruno’s help.  Two children have been kidnapped.

The kidnapper, Jonas Mabry, was himself a victim whom Bruno rescued as a small child.  Now Mabry demands a fool’s retribution, a million dollar ransom, and Bruno to put his life on the line to get the money. In this twisted turn of fate, Bruno returns as a wanted criminal to California.  Despite the risk of arrest and even his life, he cannot turn his back on these kids.  And neither can Bruno’s girlfriend, Marie.
~

The day the house bled started out sunny and warm. I was a rookie street cop in South Central Los Angeles. I worked uniform patrol for the sheriff ’s department, a job that could impact the community in so many positive ways. I ferreted out the predators, either put them in jail or prodded them until they moved on to another neighborhood. I liked working with the kids the most. I tried to find them before they were corrupted by the cancerous part of the street. There were the lost causes, but most kids wanted to better themselves and were hungry for guidance.

The absolute worst part of the job was bearing witness to the lowest ebb of humanity. I never could understand the motivation, the reasoning, the excuses for harming children. Because there weren’t any. Not in this world or any other.

The day of the horrible bleeding house incident started out great. A Blood by the name of Little Ghost had been dodging me for weeks. Anytime I was able to feed my handcuffs with a predator gave me a warm feeling. He’d set up shop slinging rock cocaine two blocks from a middle school, and I hadn’t been able to nab him. That day I put on a gray raincoat over my uniform and snuck up on him through a back alley, caught him right in the middle of a hand-to-hand deal.

So I was having a good day until the call to “keep the peace” came my way. I pulled up to a house in East Compton. White Street, west of Atlantic. A house like any other on the street, light blue with dark blue trim, maybe maintained a little better with a mowed lawn and a trimmed hedge. A man in slacks and a long- sleeve blue dress shirt stood out front wringing his hands, his expression one of genuine concern. I pulled up and parked half in the driveway, half in the street, and got out. “How can I help you, sir?”

“My name’s Micah Mabry, and I’m worried about my kids, Jonas, Betsy, and Sally. Jonas is five, Betsy’s seven, and Sally, she’s…she’s eight. Yes…yes, she’s eight last October. I knocked and knocked and they won’t answer the door. Please, you have to help me. Please.” “Okay, Mr. Mabry, slow down and start from the beginning.” “Right, right, sure. My wife Bella and I are separated. We’re getting a divorce.” “I’m sorry.”

He waved off the apology. “It’s okay, it’s a long story. But two nights ago she was supposed to meet me at McDonald’s. I was supposed to get my three kids for the weekend.” Dispatch hadn’t told me this was a hostage exchange—the term used for child custody conflicts. The adults never acted like  adults,  and  the  losers  were  always the  children  caught between  parents  they  loved,  with their  petty  conflicts  and wounded egos. The parents’ bitter emotions were the worst to deal with in these incidents. People became irrational. Child custody calls tore at my gut.

I couldn’t stand to see children cry and I always had to suppress the urge to do something about it. Mabry continued, “She never showed up. I’ve tried to call her for the last two days, so I came over here. Listen, I’m going to tell you up front, she has a restraining order against me, and I’m not supposed to be here.” No wonder she wasn’t answering the door. I  couldn’t allow him to stay if he was telling the truth about the TRO, the temporary restraining order. I said, “Do you have the court custody papers signed by the judge?”

“Yeah, yeah, sure.” He pulled them from his back pocket. I checked; they were complete and in order. He was right, it was his turn to have the kids. “Okay,” I said, “Here’s the deal. All I’m allowed to do in this case is take a report and submit it to the DA as a violation of a court order, a PC 166.4—” “You can’t make her give me my kids?” “No, you have to have your attorney pull her back into family court.” “Come on, that can take forever.”

“I know, I’m sorry.” I sat in the front seat and filled in the report form while he stood in the open door of the patrol unit staring down. I knew he was staring at me, and I couldn’t look up at him. He pulled out his wallet. “Deputy Johnson, you have kids?”

I was raising my daughter on my own and found it damn difficult to juggle her upbringing with an ever-shifting patrol schedule. I knew how hard it was to raise children and disliked him a little for throwing the kid card. He held out his wallet, the plastic sleeves cloudy from overuse. The kids were cute. What child wasn’t? I wrote the case number down on a business card, got out, and stood in the open door. I handed it to him. Micah Mabry stared at the card as if it were a disappearing lifeline. I said, “Ah, hell. You knocked?”

“Yes, yes. I’ve been here for an hour. I’ve knocked again and again the entire time. I know they’re in there. Please, Deputy?” Son of a bitch. I reached in and picked up the mic. “Two- fifty-five-Adam, start another unit to back. I’m going to force entry.” I’d hardly unkeyed the mic when Sergeant Foreman came up on the air. “Negative, Two-fifty-five-Adam. Stand by, I’m responding.”

Once Foreman arrived, no way would he do  anything other than what the book said. I tossed the mic onto the seat. The window configuration of the house, outlined in dark blue paint against the light blue of the house, made the windows look like the eyes of a monster.  I walked with purpose to the front door. I’d made up my mind and didn’t want to think about the consequences. I knocked loud enough for the neighbors to hear. No answer. “What’s your wife’s name?”

I believed him and was beginning to have a bad feeling about the entire situation. I yelled, “Bella, this is Deputy Johnson with the Los Angeles County Sheriff’s Department. I need you to open the door. Come to the door and talk to me. Now.” Something was wrong about the whole setup. Anxiety rose up in me, and I could no longer follow proper protocol. I looked down just as water, a little at first, then more, seeped under the door and out onto the porch. I stepped back and booted the door.

He rounded out his law enforcement career with a few years in the Hawaiian Islands as a Special Agent- part of a real-life “Hawaii-50″ team. He’s now retired from law enforcement and spends his time growing organic California avocados and writing, with his wife Mary and their two dogs.

What a Buzz!!! – Elite Book Promotions