Review – The Lives We Fear by Dan Otsuki 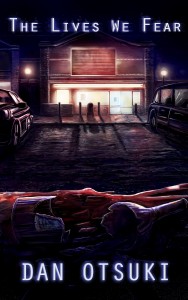 Review – The Lives We Fear by Dan Otsuki – 4 Stars

“The Lives We Fear” by Dan Otsuki is an engaging collection of horror short stories that will leave you wanting even more. Each story could easily be adapted into a script for episodic television. The dialog-rich tales lend themselves to other media for sure.

Each story explores a particular fear, both real and imagined. Whether it be monsters or loss or real-life people that we are afraid of.

The common and recurring theme throughout this book challenges the characters to show us what they would really do in a fearful situation. The depth and realism will keep readers hooked through to the end.

The well-developed characters could easily be in a modern-day “Twilight Zone”-like series on AMC or HBO. In particular “Mister Jackson Monroe” and “Keepers” lend themselves to a small screen treatment. The use of profanity would be not only allowed but also welcomed on these cable networks.

Any of these tales could be lengthened with additional scenes and rewritten as a full-length novel. We can only hope that this is to come from this promising new author.

The fears suggested in the book’s title range from fear of fatherhood to fear of the apocalypse. A creepy bed and breakfast and fear of being alone are also topics covered here.

One story doesn’t deal with fear as much as it presents a scenario of how children could come to beat a man, to death,  for seemingly no reason. In this case fear is transferred from the characters to the reader. It raises the stakes from playing with imaginary monsters to going after an innocent, but real, live human. It presents a commentary on how conditioned we are from being bombarded with a lifetime of violent games and stories. Some of us erroneously believe that there are no real consequences to our actions. A thrill killing becomes just something to do for fun or to see what would happen.

In all, this collection will please fans of the genre. The way that each tale is set in modern times with realistic and believable characters makes it a good read.

This collection of eight short stories evokes shades of both Stephen King and “The Twilight Zone” as well. No doubt these are some of the young author’s influences. Still an undergraduate studying in Washington State, we hope to see much more from him. 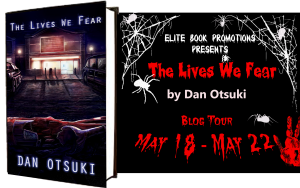 Fear. From childhood it is instilled in all to fear monsters, ghosts, and other terrors within the realm of the unknown. As adults, we easily forget about the boogeyman who lurked under our bed or in the shadows of a dark corner. Our grown-up fears take on an even more disturbing twist that frequently mingles with reality.

What happens when the things we really fear—the things we can’t bare to lose—invade our lives? The truest form of the human condition is exposed. Whether rational, or irrational, survival—at any cost—becomes paramount, morals be damned. The Lives We Fear is a compilation of short stories that examines these chilling and very plausible scenarios: what does one do when the people one loves are endangered? When life spirals from beyond one’s control? Or, even when one’s humanity is in jeopardy?

From lost loves, to lost friends, wolves in sheep’s clothing, and even getting caught amidst seemingly innocent mistakes, these stories examine just what keeps us up at night and what preoccupies our nightmares when we finally sleep, because it’s not always our own demise that forces us to shiver. 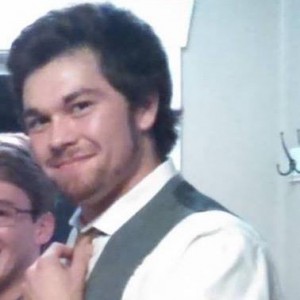 Born on October 14, 1993, Dan Otsuki grew up an only child. As his early life found him a good thirty minutes or more away from kindergarten and preschool friends, Dan found solace in action figures and Legos, making up his own narrative of their lives and adventures. Starting in high school, and inspired by authors like Stephen King and media like The Twilight Zone, the Mass Effect video game series, and a plethora of horror films, Dan began to pursue his passion for writing. Since attending the University of Puget Sound in Tacoma, Washington—where Dan currently lives as he works on his undergraduate degree—Dan has found a passion for religious studies in addition to English and creative writing. He currently works at Diversions Cafe on the Puget Sound campus, and spends much of his free time engrossed with all kinds of movies with his close friends.

It felt like a movie: the extras standing in the background, overacting their sense of excitement, or sorrow, or terror; the sound seeming to distort, as though the editors wanted the shot to drown out the world, make the audience focus on what just happened, to give them the sense of how important and terrible what they just saw was. There was blood, too, and not the cheap stuff they get for bad indie films, but the kind that looks real as it spreads through the victim’s clothing like a cancer, then falls with the body. The victim, bless his role, should get an award for his performance—bags dropped to the ground, chest and shoulders shuddering from the impact as he fell with a gasp and nothing more. The shooter should at least be nominated for something, his face cold enough to cut himself from the scene, as though he could see it all unfold as a bystander. Maybe he’s the director. If so, he knows exactly what he’s doing—no ad-libbing. The victim falls, and the boys in the editing room know exactly how to work slow-motion, milk it. They really want the audience to see him fall, his head smacking the pavement, and the red wine in one of his bags falling out and cracking open and mixing with the blood around his head and that spilling from his chest (they’ll call it a symbol for a halo). The audience will cringe, maybe shriek, but after the climax, the falling resolution will leave them feeling satisfied, like that was bound to happen. Peaceful. Because a movie isn’t real. Even those “based on real events” aren’t really real. It’s just a bunch of actors, sets, props, directions—but none of it’s real.
Daniel swayed back and forth, gun trembling in his hands. He wished it was a movie. In the movies, it always works out for the good guy. Right? Wasn’t he the good guy? Wasn’t he? It sure wasn’t Jackson. Jackson’s dead.
Dead.
Really dead. Not like the movies.

GIVEAWAY
The author is giving away e-copies of THE LIVES WE FEAR for 4 winners of the Rafflecopter.