TAMING THE TIDA
BY ESLYNNE SMITH 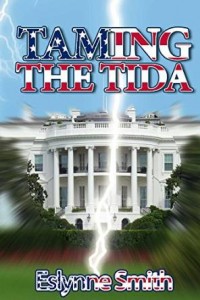 Tired of American politics? Author Eslynn Smith has a remedy in the character of Sharmin Smith, the former first female President of the United States in the book Taming the Tida. The story launches with the strange disappearance of Smith, now in her elder years, when a lightning flash signals the tragic event at the White House and her assumed passing to the other side. The news devastates the country.

In this not too distant futuristic novel, reporter Amanda Thompson reflects on a deeply personal interview she had with Sharmin who granted Thompson the details of her life story as it began with her bid for the presidency decades earlier in 2016. The interview is shared with the country in funereal mourning and tribute in honor of Smith. Serving more as a biography of Sharmin’s life from childhood through the presidency itself, the story presents a refreshingly candid and nonpolitical agenda in trying to make the world a better place especially for children by eradicating pedophiles.

Sharmin, however, is not the typical candidate. When the Republican Party is at a loss for a campaign leader to take on Hillary Clinton, they propose a reality show “Who Wants to Be President?” to make the selection for them! A wife and mother of five, Sharmin, seems to get involved in the audition on a whim, but takes the challenge seriously as the competition thins out. She is called upon to step outside of her comfort zone in dancing, singing, and ultimately exposing some of the tragic truths of her painfully abusive upbringing and experiences as a military brat.

Despite the victimization she has endured, there is an infectious optimism and belief in Sharmin toward creating a peaceful world that seems to implement realistic solutions to the battles Americans wage daily. Prioritizing issues that do not pander to a cynical audience, the contestant is able to win over the public in an honest and endearing way. Her “Appropriate American Response” to world issues steals the show. The legacy is continued in her daughter, Elsa, who follows as the President of the United States herself.

The author does not miss a step as she taps into every relevant topic in today’s political arena: immigration, the prison system, the environment, guns, taxes, welfare, and much more. Leave your own political agenda at the door as you follow the campaign philosophy of a hybrid Republican Democrat and see how she can change the world! 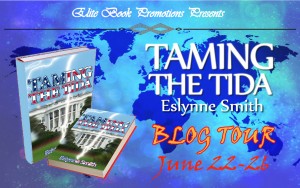 In 2014 the nation was in crisis. Partisan politics were the rule of the day, stifling and sabotaging meaningful change in Washington. Americans were desperate for someone—anyone—to offer them hope, to show them there was indeed a light at the end of the tunnel.

Smith, a survivor of childhood sexual abuse, caught the country’s attention, delivering her unusual, groundbreaking opinions with two service dogs by her side. She gave a nation hope, and in return, Americans gave her their trust.

The first book of the Change the World trilogy, Taming the Tida gives hope to those tired of contemporary political gridlock and looks to a brighter tomorrow. 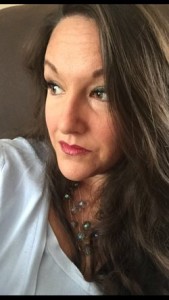 Eslynne Smith is the Author of Taming the Tida, a fictional story about politics, religion and a Reality TV show. Eslynne was born in a naval hospital in Newport, RI just after the Navy’s 200th birthday. She has been following politics ever since her mother told her she was related to James K. Polk, the 11th President of The United States of America. She comes from a long line of military spouses and has been an enlisted spouse, a commissioned spouse and she is currently a retired spouse as her husband recently retired after 22 years of naval service.

She has held professional positions for over 20 years in the financial services industry, including the “Big 3”. She began by working in the accounting department for a computer company before she moved into auto finance and finally on to the mortgage industry. She obtained her Direct Endorsement from FHA to underwrite government loans in 2005 just before Hurricane Katrina hit. She held training and leadership roles where she did everything from write policies and procedures for default and collections to manage underwriting and repurchase teams during the recent mortgage crisis.

Eslynne was diagnosed with PTSD in the summer of 2008 from traumatic childhood events. After years of multiple therapy techniques she accepted the advice of a trusted therapist and stepped away from her professional life to focus on her personal life. It was during this time that she embraced writing for pleasure and decided to undertake the Great American Novel.

“There’s a meme out there stating that people who cuss are actually more trustworthy. If that’s true, then I’m the most trustworthy fucker you’ll ever meet in politics.” The announcer slides his arm around her shoulder as they both laugh at the remarks. He looks at her and their eyes meet for an uncomfortable moment. She slides out from under his arm and squares her shoulders.

“You look amazing tonight.” He breathes.

Sharmin rolls her eyes and drops a little accent as she responds “Thank you, I clean up alright. It helps when you have a team of pros that knows what they’re doing. I don’t even recognize myself. It’s so itchy. I can’t wait to get it off.”

“It’s a good look on you, you should do this more often.” He smiles and tries to be charming.

Sharmin smirks at him and nods her head “I’ll keep that in mind.”

He continues “One question please. If you are elected as President, do you want to be called Madam or Mrs.?”

Sharmin looks him in the eyes and said “Ms. please, I’m not marrying it. It’s a title I won’t just have to earn it, I’ll have to prove I deserve it. Not as a Madam running a whore house, but as the President running our White House.” then she walks away, leaving him to stare after her as she walks out on stage.

Amazon, Religious & Inspirational, YA Review – Taming of the Tida by Eslynne Smith June 26, 2015 admin Leave a comment TAMING THE TIDA BY ESLYNNE SMITH REVIEW TAMING THE TIDA Tired of American politics? Author Eslynn Smith has a remedy in the character of Sharmin Smith, the former first female President of the United…